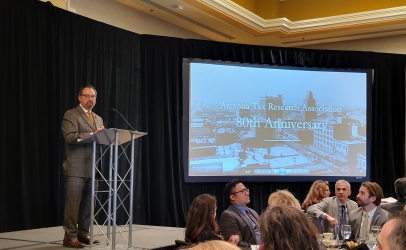 ATRA celebrated it's 80th anniversary as the Taxpayer's Watchdog at the 2021 ATRA Outlook Conference on November 18, 2021. 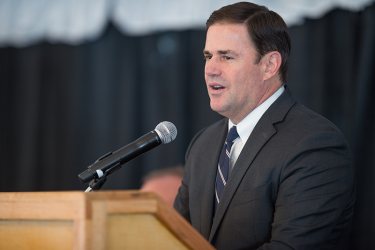 ATRA Chairman Lyn White presents Keely Hitt with the 2013 Outstanding Member award at the Outlook Conference luncheon. Heidi Schaefer shared in the distinction and was presented with the same award.
During last year’s event, Keely Hitt was described as a “rising star” and ATRA completely agrees with that assessment. As the Senior Tax Manager for Circle K Stores, Keely Hitt has placed a very important role in assisting ATRA’s advocacy for sound fiscal policy in Arizona. Keely is a member of the ATRA Board of Directors, the Executive Committee, and a regular at both the Tax and Legislative Policy Committees.

For the last 21 years, ATRA has recognized outstanding individuals whose work in the public sector is characterized by strong, continuing, and consistent efforts to spend taxpayers dollars wisely and to promote government that is efficient, open, and accountable. 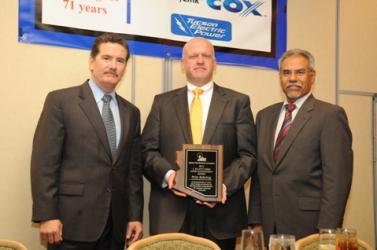 ATRA selected Fritz Behring as the recipient of the J. Elliott Hibbs ATRA Good Government Award for 2011. The award was presented during ATRA's Annual Meeting Luncheon on Friday, November 18 at the Pointe Hilton Tapatio Cliffs Resort.

For the last 20 years, ATRA has recognized outstanding individuals whose work in the public sector is characterized by strong, continuing, and consistent efforts to spend taxpayers dollars wisely and to promote government that is efficient, open, and accountable. 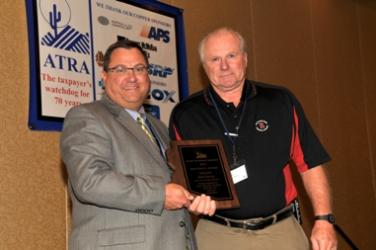 The highlight of ATRA’s Annual Meeting luncheon on November 19th was the presentation of the 2010 ATRA Watchdog Award to Senate President Bob Burns. Senator Burns is the seventh recipient of the award that ATRA instituted in 1990 as a way of recognizing an Arizona elected official for the often thankless job of opposing frivolous and wasteful spending of taxpayers’ dollars.

First elected to the Arizona House of Representatives in 1988, Senator Burns served 12 years there before being elected to the Arizona Senate in 2002. Through most of his service in the Legislature, he was a fixture in the Appropriations Committees, serving as the committee’s chairman in both Houses. He currently serves as the Senate President in the 49th Legislature.

The award was presented by ATRA board member Russell Smoldon, who noted that Senator Burns’ long career was almost singularly focused on advocacy for taxpayers’ rights and principled stands against wasteful spending.

Smoldon said, “Bob leaves behind a great legacy of statesmanship that every member of the Legislature should aspire to. He was always working on issues of statewide importance. Not because they were fun or easy but because good statesmen embrace the major challenges of the day. His entire career has truly exemplified all of the qualities that this award is intended to honor and support.”

In accepting the award, Senator Burns said “this is certainly a surprise and I am moved and very appreciative of the recognition.” 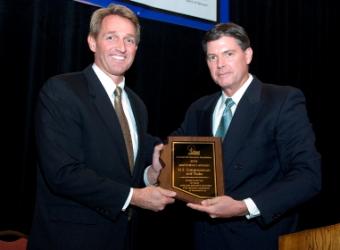 ATRA was honored to present the 2009 Watchdog Award to Congressman Jeff Flake in recognition of his tireless advocacy of taxpayers’ rights and his principled stands against wasteful spending in our nation’s capitol.