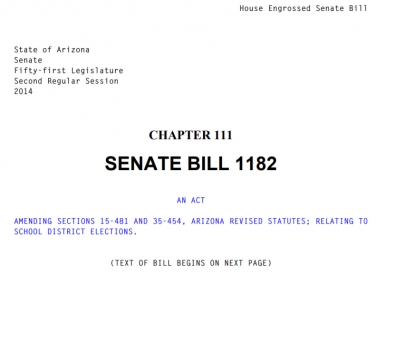 https://apps.azleg.gov/BillStatus/BillOverview/33492
SB1182 addresses a growing concern that these publicity pamphlets have become
taxpayer-financed electioneering. Often times, the purpose statement in the publicity
pamphlet for local government elections have gone well beyond providing an
explanation for the purpose of the election. There should be a clear distinction between
the taxpayer-funded section in the pamphlet that is factual-based and the advocacy
section of the pamphlet.
As amended in Senate Finance, SB1182 specifies that the justification for the purpose of
the override or bond election is limited to the pro and con statements included in the
publicity pamphlet. This measure will ensure that publicity pamphlets distributed by
local governments are neutral documents designed to inform voters on the purpose of
the election as opposed to taxpayer-financed pieces.