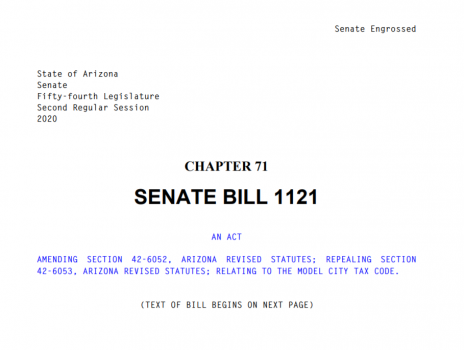 SB1121 seeks to simplify, streamline and create transparency for the process to amend
the MCTC. SB1121 will accomplish the following:
- Meetings are called by the chairman of the MTCC in response to any proposed
amendment instead of the second Friday of every other month.
- Clarifies that DOR and any taxpayer may propose an amendment to the MCTC, in
addition to a city or town.
- Requires proposed amendments to be submitted to DOR at least 60 days prior to
adoption by the MTCC.
- Requires DOR to post the proposed amendment, meeting notice, and agenda to
its website at least 30 days prior to the MTCC holding an informational hearing.
- At the informational hearing, DOR staff is required to provide the legal analysis to
the MTCC.
- Following an informational hearing, any changes to the proposed amendment
must be posted to the DOR website within five days following the hearing.
- At least 60 days after receiving a proposed amendment, the MTCC is required to
hold a hearing to consider adoption of any amendment