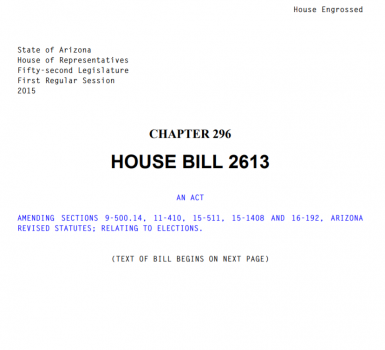 https://apps.azleg.gov/BillStatus/BillOverview/65954
HB2613 does two important things to clarify the actions of jurisdictions between the call of a
tax-question election through election day. First, it directs them to limit “district-focused”
advertising (promotions where the district itself is the focus) to official business that is
germane to the functioning of the jurisdiction and maintains their historical frequency, scope,
and distribution. This sets a simple test for local governments and the county attorney’s office,
who is often asked to investigate claims of electioneering.
Second, this bill protects local governments engaging in routine business by giving them a
framework to follow during tax-question elections.
This is not a solution seeking a problem. The Maricopa County hospital recently spent
$755,000 of taxpayer money to influence Prop 480 by creating an unprecedented ad-campaign
that ran exclusively during the election.
The power of the state should not be used to influence voters to increase its authority or
capacity.